I remember from my childhood that magic aroma from the kitchen when my aunt was brewing cezve coffee and it always attracted me. Grinding fresh beans on a beautiful hand grinder made it like a special ritual. Everyone gathered around for a cup of coffee and a chat as the kitchen is the favourite place of every Russian family to spend time. Maybe those memories can explain my passion for this drink. Nowadays it's becoming more and more common that coffee is the drink when people gather for those long conversations.

Although coffee consumption is still lower than in some European countries for many reasons but in fact, coffee is not a new entrant in Russia, tradition of its drinking was carefully developed by Peter the Great I, but only rich could afford it. In the 19th century coffee culture in Russia fell into a decay due to social and political crisis. During the Soviet Union period, coffee was in shortage and it was really hard to get your hands on it. It was common that people turned into substitutes such as chicory roots and barley. Coffee was usually brewed in cezve or how we call it in Russia “turka”.

Strong “turka” traditions still dominate among consumers. The simplicity of the device and its “magic” makes cezve the king of Russian home brewing methods. It also affects specialty coffee industry: Sergey Blinnikov, head barista of popular chain of coffee shops Cezve Coffee the World Cezve/Ibric Champion in 2019! The idea of his signature drink was to reconstruct the coffee cherry in the drink, using cascara, silverskin and dried coffee flowers.

Cezve gives a lot of opportunities to bring unique flavors to coffee and besides is a great way to combine different coffee tastes with spices, flowers or juices. Developing coffee traditions of a particular country is a great way to express the identity and bring passion to the local coffee scene.

Russians are often associated as a tea drinking people and there are many reasons for this: 78% of the people say they drink at least one cup of a tea daily and I'm not an exception. We prefer to pair tea with some sweets or pastry and normally have a few “tea breaks” during daytime. However, coffee-based beverages are a huge trend and for the past few years coffee started to dominate among consumers, especially in big cities.

Coffee consumption in Russia is still lower than in some European countries: 0,4 kg per capita, compared to Finland: 10,2 kg per capita in 2020, according to Euromonitor.

Some numbers behind Russian coffee market

During PIR Coffee Expo (annual coffee event in Moscow) in 2019 I participated in a very interesting cupping, initiated by one of the most famous Russian specialty coffee roaster Dmitry Boroday. He raised the question of cinnamon-tasting anaerobic fermentation which was popular for the past years. For the experiment, he made post fermentation of green coffee beans by soaking them in cinnamon solution. During the cupping, we had to guess which coffee was “fake” flavored, and which one had a natural cinnamon flavor profile. It was tough task, especially when it came to a low percentage of cinnamon solution.

Besides fermentation methods, Russian coffee scene professionals experiment in brewing methods. Sergey Stepanchuk, Russian Brewers Cup 2018 winner, designed and 3D printed for the competition his own coffee dripper Octo Storm. It is made of heat-proof, carbon-filled food plastic and soon will be available in ceramic as well. “The unique shape makes brewing process and extraction speed easier” says the producer.

Russians have been doing well in the World Coffee Championships in recent years:

Although Russian coffee scene demonstrated great potential for growth, it is hard to predict the developing of the situation in new reality after COVID-19. Most of the coffee shops were either closed or worked “to go” for months and it will definitely impact the whole industry. 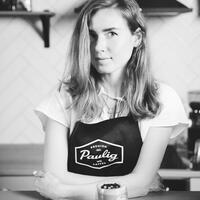 Coffee is like the exciting world tour – once you tried, you can never get enough of it.

Coffee Guru - A Cup of Coffee with Ben Morrow