3 Reasons for Brewing Coffee in an Ibrik

Preparing coffee in an ibrik was almost forgotten publicly, until professionals took interest in it again over a decade ago. Ibrik coffee has been made at home continuously in e.g. Russia and Turkey but underrated by many for not being very professional.

Ibrik or cezve is the name of the pot with a long handle for brewing Turkish coffee. In Russia it’s called turka. The pot is usually made of copper, but can be made of stainless steel, ceramics or even silver.

For almost ten years now, baristas have been competing for the Russian championship title in making ibrik coffee. The Russian Cezve & Ibrik Championship will be held in St Petersburg from 3 to 5 April 2017. This event will bring together professionals as well as coffee lovers. Making coffee in an ibrik pot is the favourite brewing method used in Russian homes.

The Russian ibrik champion Marina Khyuppenen answered a few questions for us.

1. How did you get into making ibrik coffee?

For me, there’s a sense of nostalgia about it – the process, the time, the magic of the action and the flavour that I remember from my childhood when my parents made coffee in the morning. Ibrik coffee is not just a new hobby. It is also about the desire to develop the tradition for many families and often the only way to make coffee to perfection, learn how to prepare coffee, serve it, change and complement the taste through a variety of ingredients.

And, of course, it’s about bringing this type of coffee back to the people by giving everyone the opportunity to make really delicious ibrik coffee. After all, this is one of the oldest forms of preparing coffee as the earliest mentions of similar pots can be found in 7th century sources. Ibrik coffee is the symbol of several Eastern countries and is even on UNESCO’s Intangible Cultural Heritage List.

2. When did you realise that it was not just a long-time love but also your business?

In 2013, when I returned from the World Cezve/Ibrik Championship event in Istanbul, I felt greatly inspired – I realised what ibrik coffee could really be like, how faithfully it has served in the East and how versatile this drink could be. Since then I have been seriously and permanently fascinated by making ibrik coffee.

Participating in the 2014 world championships only spurred my passion further. I began to make plans for my own coffee shop. I started the CezveCoffee project on 8 November 2014, and now I have two business locations – one in Konkovo and one in Muzeon. The emphasis in both is on ibrik coffee. We work with a variety of spices and condiments developed by us to create new and unusual combinations of flavours.  Cinnamon, nutmeg, cardamom, berries or fruit juices are used to flavour the coffee.

My favourite morning coffee is ibrik coffee with blood orange juice and nutmeg. It’s invigorating and sets me up for a terrific day.

Fact file:
From 3 to 5 April 2017, the Russian Barista Marathon will be held at the Tkachi (‘Weavers’) creative space in St Petersburg, featuring the following national championships:

The most experienced and outstanding coffee professionals from all over Russia will participate in the championships. The winners of the national championships will compete for victory at the world championships in Budapest, Hungary, on 13–15 June 2017.
The audience at the Russian Barista Marathon will not only see professionals making coffee but also will have the opportunity to attend interesting lectures by leading Russian and international coffee experts. There will also be coffee tasting and an area devoted to watching coffee-themed movies. 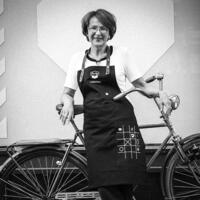 No matter where or when you see me, I’m reading or socializing with people. And always with a cup of coffee.