Brewers Cup 2020 - Finnish Nationals - how did the competition go?

In my previous blog I wrote about how to prepare for national barista championships and now I'm going to tell you my competition in 2020 did go. I participated in Brewers Cup 2020 - Finnish nationals that where held in March, 2020.

The competition was 7th March 2020 in Kaffecentralen HQ in Lauttasaari, Helsinki. It was an early morning as I needed to be there at 7:30 in the morning and before getting there I needed to pick up Tomi from his home and drop off my dog Mauri to a colleague for a daycare. Usually before exciting days like this I don't sleep well but night before the competition I slept like a baby. Maybe it was because I had been training quite intensively and stressing quite a bit about everything.

The competition was divided into two rounds; compulsory round and open round.

We started the recipe creation with cupping and getting to know the grinder. The coffee was tasting quite neutral and we were guessing right away that it would be a washed Colombian. We decided that we are going to try first with my competition recipe;

In the first hour we were able to find an ok recipe. It was tasting balanced and some what sweet but it was lacking something and the acidity wasn't great at all. So we decided to play around with different recipes but keep Hario v60 as brewing method. After a few tests we noticed that the coffee was tasting better with faster extraction so we decided to change the recipe "totally". The final recipe was supposed to be;

And this is where the things went wrong. Before going to the stage to brew for the judges I memorized the recipe in the backstage. BUT. I took everything else from the notes as they are above but some reason (nerves?) I took the grind setting from the previous recipe - 9,8 in stead of 7,8. So it was way too coarse for the recipe and it wasn't until in the stage when I brewed the first cup that I noticed the mistake. Now looking back at it, I could have made the first cup again (I would have had enough time and coffee for that) and changed the recipe to the first one on the go.

The mistake can be seen in the points I got from the compulsory round and the TDSs are way too low (meaning under-extraction).

After the disappointing compulsory round, it was time for the open round which I had practiced for two months. I knew after the compulsory round that it is almost impossible for me to win the competition but I wanted to show my best to the judges. Before the actual presentation I needed to check the grind size for my recipe and right away we noticed a small problem; the grinder had been in my car overnight and the burrs had cooled down quite a bit. This meant that the grinding was a bit different and the coffee wasn't tasting as good as I wanted. After some heating up of the grinder and grind size check, we were able to get the flavor back to normal and delicious.

Walking to the stage I was feeling extremely nervous and the first minutes of the presentation felt "horrible". My legs were shaking a lot because I was so nervous but I had practiced the presentation so much that I could just hit "play" and the words came out of my mouth. But then about 2 minutes into the presentation, just before I was about to start brewing I looked at the head judge. He smiling with biggest smile imaginable which made feel that this is going well and I was able to relax for the rest of the presentation. And as you can see from the head judge's notes on the score sheet the brewing went extremely well.

I knew that I had good coffee and I was going to do well in the open round because of it. But I wasn't expecting this kind of points. Especially about two things I am really happy;

Check out my presentation yourself and let me know how well did it go! :) 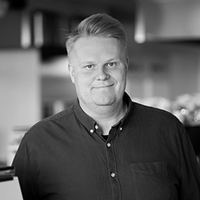