Lithuanian coffee culture is a one of a kind. Coffee came to Lithuania 300 years ago via Turkey and it was available only to the privileged class. Nowadays in Lithuania, it is common to drink espresso based coffees but it's becoming more common to try out different coffee types. Also specialty coffee cafés are really booming in Lithuania. Let's dig deeper into the Lithuanian coffee culture!

The history of coffee in Lithuania

Coffee came to Lithuania some 300 years ago via Turkey in 18th century and it all started with the privileged class or nobility. So after long-standing propaganda of Turkish culture, at the beginning of the 19th century, coffee became entrenched in the culture of the nobility and became a regular beverage. Nowadays, coffee is liked by everyone and we can‘t imagine our days without this dark beverage. Although Lithuanians prefer coffee with milk, trends show that Lithuanians are paying more attention to coffee and are rediscovering classic black coffee.  Quality coffee, single origin coffee or specialty coffee are no new terms for locals – coffee culture is truly on the rise and changed a lot.

But let‘s start from the early beginning and move towards to these days.

Back in 19th century, coffee was enjoyed mostly by nobility as a morning drink, usually with milk and sugar, along with buns and newspaper. Fast forward two hundred years and we do the same, expect we scroll our phones while sipping morning cup of Joe. Coffee had a special place in big manors, called "kaviarnė“, smaller manors did not have a separate room for coffee, but coffee was prepared in spacious wardrobe-like place. To be more concrete, those wardrobe spaces (or also lady‘s maid bedroom) would store not only the lady's clothes, but also various household utensils, sometimes medicines, spices, delicacies. The reputation of the housewife depended on.... you guessed, how tasty the coffee was. In small manors, coffee was prepared by the daughter with the care of the house lady, in the affluent houses - by a specially trained specialist, the so-called “kaviarka” (kawiarka), and well, in the palace of the nobles - by a specially hired Turk.

According to books, Lithuanians valued really dark, carbon black coffee as well as coffee with fresh cream. Local historians mention that morning coffee was drunk with cream or almond milk, and in the afternoon - black or with cream, as one likes. Occasionally, the cream was mixed with the yolks, sprinkled with silvered almond - just to be as impressive as possible.

Women were more accustomed to the black gold than men – they drank coffee during breakfast, lunch, after dinner and especially during parties. Men drank coffee in order to avoid alcoholic beverages during parties – according to the customs, if you drank coffee, then for two more hours, you were allowed to "rest“ from drinking wine. In the absence of research, it is difficult to say which type of coffee beans were popular at that time in Lithuania. But the mentions of "mocha coffee" suggest that the most valued was the aroma of Coffea Arabica beans.

Coffee was luxury item still, so not all nobles could afford it, not to mention farmers or even small landlords. As they were not able to buy coffee, they sought to imitate the affluent crowd by dark roasting beets, carrots, peas, barley, chicory, acorns or a mixture of wheat, barley, rye. Sometimes medicinal yew (Prunus laurocerasus) was also used, not knowing that it was poisonous! This fake coffee was mainly drunk with lots of milk, for breakfast or in the afternoon. You can ask, but why bother and imitate the real coffee? The answer is simple: it was the desire to be equal to the higher strata of society. And peasants could afford to buy surrogate coffee, made of beetroot or barley and even save on sugar as this substitute was naturally sweet and way way cheaper than coffee or tea at that time. I also remember drinking white barley coffee for breakfast at my grandparents during the summer – and when i buy it now, made from locally grown barley, I am immediately transported to that breakfast table in my childhood, when grandmother was preparing pancakes to me and my sister.

What about the early cafes? They were called "kawiarni" or "kofenhauzy“ in the mid-18th century (Lithuania and Poland was a commonwealth sate at that time). And the tradition of cafes came to Vilnius from Poland. The popularity sprang and coffee houses were on the rise. Who were the most frequent visitors to cafes? Journalists, actually. During 19th century it was pretty trendy to spend time outside the city, go out in the nature, thus "kofenhauzy“ started to appear in the surroundings of the city, in bigger manors. City's residents were attracted to visits due to open sky location, summer parties, chic picnics for gentlemen, dance night for students or luxurious lunches.

Then was the Soviet era in Lithuania and it was entirely different from pre-war cafes or the current ones. The differences lie not in quality of coffee or cakes and service, but what social function do people performed in cafes, what did they do. So changes, especially in Vilnius and Kaunas cafes, date back to the 20th century. Soviet cafes were not typical cafes as you imagine now, but more like canteens and modest, which smelled more like sauerkraut than coffee. There was a lack of communication, but a strong aroma of alcohol was present. (During soviet era, a custom of drinking your own alcohol, e.g. fortified or natural wine, from under the table was once a norm in cafes). In contrast to pre-war cafes, the dominant smell was of coffee, newspapers were read, and arts and politics were hotly debated. The tradition of European cafes in pre-war Vilnius were more similar to imperial Vienna than to Soviet Vilnius. In general, coffee culture differed from city to city, town to town in Lithuania (villages had their own way of gathering in a close circle of friends). And despite all the turmoil and historical changes, coffee was drunk in Lithuania at all times and is still enjoyed.

Those were definitely interesting times to enjoy life. But what has changed and what is the current Lithuanian coffee culture?

As claimed by annual Kantar Atlas survey of consumer habits and attitudes, coffee, along with tea lies in the top three. Once titled a tea country, we no longer consume as much tea as we drink now coffee.

After our Independence in 1991, the situation in Lithuania has changed greatly. It can be divided into stages: everyone thought that Finnish coffee was the best, then we began to value Italian coffee, then we drank only in-cup coffee, then take away coffee was a thing, still assuming Italian coffee and Arabica is the best coffee. Then came specialty cafes to Vilnius and micro roasteries, bringing different origins to our noses. Lately, plant-based milks, filtered coffee, Cold Brew, and less known origins are on the rise and a must in any specialty coffee place.

So the reality is completely different now, people are educated, they understand the differences between filter and espresso or light and dark roast, and know that quality lies firstly in the beans. Also, the supply of coffee has improved, people have a larger and better choice of coffee. For more on Vilnius Coffee Scene, you can read here, we do have amazing quality coffee roasters and cafes all around Lithuania. Or get a visual look into the Specialty Coffee Map of Baltic States, done by creative AST Leonardo Santetti (bigger picture of the map is here).

Although we are curious and receptive to innovations, yet majority prefer one type of coffee – cappuccino or with milk. But things  are starting to change slowly and we discover plain black coffee. For us, a cup of Joe is a sacred morning ritual, a source of energy, symbol of friendship and adventure. The amount of people experimenting with coffee, its preparation methods and the variety of beans is still relatively small. According to V. Kratulis, founder of Huracan Coffee chain, 70 % are conservative coffee lovers and 30 % are coffee connoisseurs and gourmets who promote changes in the market. As claimed by Kratulis, it‘s challenging to develop a gourmet experience, as right conditions are available only in large cities; yet the situation is favorable, because the culture of coffee drinking has not yet been formed: people do not have very deep convictions, they easily accept innovations from Western countries. Young Lithuanians are prone to try new things/trends, yet they prefer coffee with milk, white older generation – black (Alpro 2019 survey, Mindshare). As for the supermarket goers – beans and ground coffee wins over instant coffee choice.

A tendency for take away coffee is increasing due to emergence of coffee shops and chains. Huracan, Vero Cafe, Caffeine are the most known and widespread coffee chains throughout the country. We are no longer lagging behind the western neighbors – we‘re experiencing a fast rise in coffee culture, with the help of the largest Vilnius Coffee Festival in the Baltics as well many talented roasters and baristas.

What is the status quo of Lithuanian Coffee culture?

Currently, freshly roasted, specialty coffee can be also found it restaurants, hotels, even ferries and at home. We are growing a steady number of coffee gourmets and professionals thru educational activities, SCA Lithuania community, independent cuppings organised by cafes and roasters.

We are lucky to have Emaluelis Ryklys in Vilnius – the inventor of Bro brewing device (which is popular worldwide) and author of the first Lithuanian book about coffee (we‘ve never had one before). And many inspiring, curious roasters, cafes and baristas around. It‘s a great time to be alive and enjoy not only a caffeine hit, but savor and explore everything what the bean can give. With the help of barista and their online videos during pandemic, of course.

With so many professional cafes and coffee knowledge, Lithuanians like to enjoy quality beans not only in their favorite cafes, but also at home. The rise of brewing coffee at home was proved by the global pandemic last year. Coffee professionals offered coffee subscriptions and many recipes for Chemex, V60 or Aeropress to make at home. And did we took this chance, oh yes. Our kitchens became the play zone to learn how to froth the milk with French press for cappuccino, or how to make strong espresso with Aeropress or adorned Moka pot. Some tried cold brewing during the summer. These challenging times were a place for learning new skills, but of course, we all missed hanging in our favorite coffee shops.

Once again, we are living in exciting times and I am looking what the future holds for the coffee culture of Lithuania. 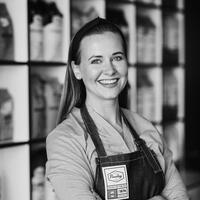 I call myself a 'food' or gastronomic person, since I‘m all into it. From finishing my masters in Food Identity, to being a certified chocolate taster and connoisseur, finishing champagne academy or nutrition courses online and diving into the interesting world of flavors, tastes.