Moscow Coffee and Tea Expo is one of the most important events for coffee professionals and enthusiasts in Russia. This four-day event took place in October and gathered together people from coffee roasteries to beginner baristas.

From 9 to 12 October, Moscow hosted a major milestone event for coffee professionals in Russia and CIS member states: Moscow Coffee and Tea Expo 2017, the 5th international trade exhibition for tea and coffee industry connoisseurs. The event was held within a large-scale fair for hoteliers and caterers operating in Russia, the PIR Expo Russian Hospitality Week. For four days, the PIR, which took place in the Crocus Expo complex, riveted the attention of many who are linked to the catering and hospitality sector, including coffee house owners, managers and baristas as well as equipment manufacturers and coffee roasteries. The equipment brought to the fair by manufacturers and suppliers covered a range of coffee machines, alternative coffee makers and accessories, coffee grinders, roasting machines, tea brewing devices and a variety of packaging products.

The companies represented at the fair included major well-known brands such as Paulig, La Marzocco, Nuova Simonelli, Victoria Arduino, Franke and many others.

The key topics covered by the business programme were issues found challenging in the tea and coffee market: coffee house management, coffee house marketing and promotion, the selection and purchasing of coffee beans as well as roasting techniques.

The exhibition area was divided into eight sections, each of which focused on a specific theme and was of particular interest to its target group of professionals.

This was the main educational stage of the Moscow Coffee and Tea Expo where prominent tea and coffee industry figures spoke about opening a coffee house, establishing a long-running business and the factors that influence its success. Top international experts shared their experience and gave recommendations on how to organise sales, increase revenue and maximise coffee house operation efficiency. At the same time, guest speakers from related sectors provided tips on marketing, public relations, design, information technology and other important aspects of running a business.

This space hosted seminars and workshops unveiling all the secrets of working with coffee: growing, processing, selecting and roasting green coffee beans as well as questions related to championships, customer service and rules of serving coffee. Beginner baristas and experienced roasters alike could find something interesting, important and useful to hear.

This space featured a programme of seminars and workshops introducing visitors to the latest coffee trends from all over the world: coffee and alcohol aromatics, latte art, food pairing and many others. The first Russian Aromatics Championship, experiments with coffee and alcohol, cold brew, tea trends, nitro coffee, coffee beer and cascara – the Coffee Trends space was fast to amaze, inspire and even blow your mind!

It was here that new formulas and an entirely new level of coffee-making were represented. This was where the Latte Art Battle and Russia’s Alternative Cup Tasting Championship 2017 were held and where you could see performances from world-famous stars of the coffee industry: Arnon Thitiprasert, winner of the 2017 World Latte Art Championship, and Benjamin Put, multiple finalist at the World Barista Championship.

We had a great opportunity to taste all the unique micro-lot coffees and legendary varieties presented by leading Russian roasteries and green coffee suppliers in one space during the four days of the trade fair. The Cupping Room Roasters & Traders had over a thousand visitors over these four days. This was where anyone could experience a multitude of varieties and one-off micro-lot batches supplied by leading exporters and roasteries.

Russian Coffee Cup is Russia’s first annual championship for coffee house teams, which was now held for the fourth time. The main principle of the championship lies in the competition of entire teams, not individual baristas. The final featured ten contestant crews from different cities competing for the title of best coffee house in the country as well as for going on a coffee tour of their dreams. The judges and the audience saw the participants introduce their coffee houses, highlight the unique traits of their concept, show the professional skills of brewing coffee and making coffee-based drinks, demonstrate knowledge of all the intricacies of speciality coffee and display creativity in the “Black Box” tour. The team that received the top score and won the championship was Akademiya Kofe, a café from Novosibirsk.

This was the central and main competition space, which saw two major championships of the industry professionals. For the first two days of the fair, this is where the finalists of the unique Russian Coffee Cup championship were competing. Then, the arena was occupied by the best baristas of Moscow contesting for the right to qualify for the final of the Russian National Barista Championship. 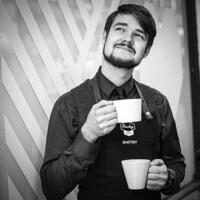 I love coffee because of the same rules that can be found in music. They make the composition ideal: tone, depth, harmony, synergy, talent and inspiration.